Are you looking for the best wire surveillance kit available in the market? Then you should definitely go for PMLN6129A. Deciding to buy this radio surveillance kit will be one of the best decisions of your life as the product has great value for money. It has become a popular choice among users because of the many benefits it provides. This is why you will not regret deciding to invest in it.

If you are still not sure about buying this top-quality wire surveillance kit, then check out the benefits this kit has to offer to you below.

The most prominent feature of PMLN6129A is that it is compatible with almost all the radio models. This quality is very rarely found in radio surveillance kits these days. There is a huge list of radio models that you can use this device with. So, if you are looking for a device that you can operate with any radio model, then you should definitely buy PMLN6129A.

PMLN6129A is not only compatible with almost all the radio devices but it offers excellent sound quality to its users as well. No matter at what distance you are communicating with your colleague, you will not face any distortion using this kit. This is why it is becoming the top choice of users these days.

Although you would need any warranty if you decide to buy PMLN6129A, you still get one year warranty with the purchase of this kit. The warranty is great considering the device breaks down. Even though the chances of the device breaking down are not much, the warranty is still a great way to gain the confidence of the users. This shows how much the company cares for its customers.

If you are thinking that the price of this wire surveillance kit is a bit too high, you need to consider the features it has to offer. If you decide to buy a kit of lower cost, you will have to replace it occasionally because it will keep breaking down. But, this is not the case with PMLN6129A. The product has great value for money.

So, get your PMLN6129A wire surveillance kit now and avail all the benefits it has to offer.

The most widely used surveillance/earpiece kits for the CP and CT series are pieces that can work and be shared with multiple users. Those earpieces are the PMLN4443, PMLN5001, PMLN5807, PMLN6531, PMLN6532, HKLN4604 and HKLN4424. These units also come with a 1 year warranty. 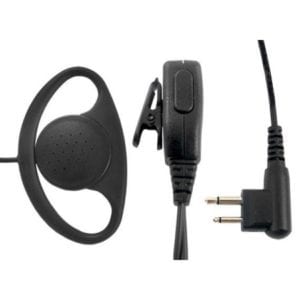 If your looking to step up to a more expensive individual personal earpiece, look no further than the RLN5318, PMLN6445, PMLN6530 and PMLN6536.  These units have the type of ear piece that is inserted into your ear opening which makes this a more personal use earpiece used more with security and surveillance scenarios. These units are typically more expensive but the PTT and sound quality are better.

The is such a wide range of earpieces that can be used for the CP and CT series radios that we will try to mention without boring you completely. Let’s look at the PMLN4443, this unit features and in-line PTT with VOX. This VOX feature allows the user to be hands free and communicate with other workers without having to remove their hands from critical applications that require control. The downside is as soon as you start speaking everyone hears the conversation. This PMLN4443 with VOX feature is easily disabled by the switch control on the PTT. The PMLN6531 is one of the newer models with the same style we call Ear Hanger and also comes with VOX.

VOX technology only works when you have the earpiece and radio that are both capable of VOX operations. Not all radios are able to operate in VOX mode. VOX has been used in Industrial and Commercial lines of work where the user is very hands on and any removal of hands from sensitive controls could put someone at risk. VOX is used widely with Crane and Heavy Equipment Operators.

Another good earpiece is the D Style PMLN5001 with Micro/Mini PTT. The PMLN5001 D Style is describing the actual look of the part that goes over the ear. It has the speaker built into the D section that lies over the ear and easy to clean for multiple users. This type of earpiece is commonly found in use with drive through fast food and restaurants.

Another favorite is the PMLN6532 which is the C Style which is easy for day long wear and usually doesn’t create ear fatigue. The PMLN6532 comes with a swivel earpiece allowing for use with either ear, in-line PTT and clothing clip. This PMLN6532 has heavy use in the retail and restaurant business sector.

There is a new comer to the earpiece market, which is a Snap Lock. The Snap Lock Earpiece is designed for the changeability of different earpiece styles while keeping the PTT and Connector to the radio the same. The different snap on earpieces is the Acoustical Tube, D-Style, C-Style, Ear Hanger and Ear Bud. Which ever is your comfort style this option makes it less expensive to switch out one style with another without breaking the bank. This Snap Lock system also allows business owners the ability to provide individual earpiece’s to employees without the worry transferring any cross contamination.

A great listen only earpiece we can’t leave out is the RLN4941 which is used in conjunction with the PMMN4013 speaker mic. The RLN4941 is a listen only and has a 3.5mm right angle plug and is used to keep conversation discreet during transmission. In very noisy environments it is too difficult to hear transmissions over the radio or speaker mic if your not using the RLN4941. 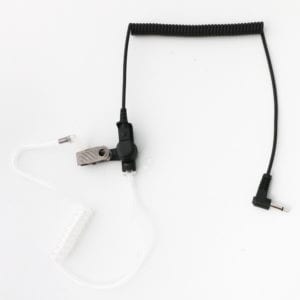 These 2 prong earpiece’s will work with any Motorola 2 prong accessory port. Below is a list of compatible radios. (Not All Radios Mentioned)

The Motorola RLN4941A single wire listen only ear piece is the first choice for many people who want discrete communication.  The RLN4941 has a clear ear tube that helps to keep the unit virtually undetectable.  There are several options including mushroom tips, small medium and large ear molds that are available. This gives you the ability to choose what is the most 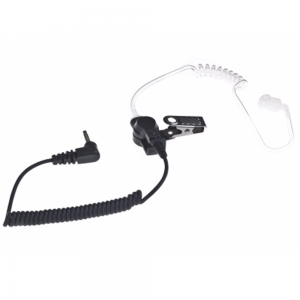 comfortable for long wear.  There is also several replacement brands available but only one brand that we have tested held up to the quality of the Motorola Original RLN4941.   Command Tac RLN4941 out lasted the Motorola Original in our field testing.  We have also found that the Command Tac RLN4941A comes with an extra ear tube included at about a third of the cost.

Motorola has long been known for making outstanding surveillance pieces.  The PMLN6129A is just another notch in their belt giving them the leading edge.

Along came Command Tac who has decided to out do the Motorola Original with its own version of the PMLN6129A.   It is known as the CTLN6129A.  It comes in at around half the cost of the Motorola Original, we don’t expect that to last long.  As the demand goes up for the Command Tack PMLN6129A you are most likely going to see the price rise also.  The nice thing about this surveillance piece is it has its own PTT with a direct connect to your radio.  This makes the use of a speaker mic obsolete.  It also comes with a clear coiled ear tube which can be worn discretely if you would like.  As with all Command Tac products you are going to see their quality meets or exceeds the Motorola OEM versions.  This is going to create real competition in the market.